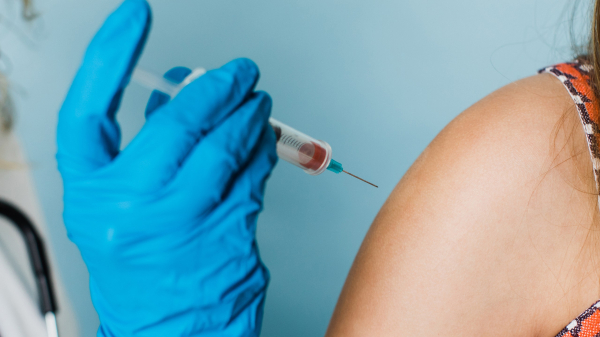 Emma Yarbrough’s psoriasis diagnosis came early at age eight. “I had totally clear skin as a kid, then spots started popping up on my elbows,” she says. By the time Yarbrough, who’s now 33, entered middle school, she says 80 percent of her body was fair game for psoriasis flare-ups.

Psoriasis, a chronic, inflammatory disease, can cause raised plaques and scales on the skin when an overactive immune system prompts skin cells to grow more quickly. While scientists aren’t totally sure what causes the condition, they suspect people’s immune systems and genetics are involved. Anyone of any age can experience psoriasis, but often, according to the National Psoriasis Foundation, diagnosis occurs between ages 15 and 25.

Most of the time, Yarbrough says, the spots were present, but somewhat under control. But when she experienced heightened inflammation, the spots returned with a vengeance –– they weren’t just brighter and redder, but painful and itchy, which was more than just uncomfortable. “Scratching it would cause it to bleed, which would then make the psoriasis worse,” Yarbrough says.

Her psoriasis affected her mentally and socially, too. Yarbrough developed obsessive-compulsive disorder (OCD), a mental health disorder that causes obsessive thoughts and compulsive behaviors, which caused her to pick at her psoriasis. Yarbrough says she also struggled with self confidence throughout her teen years. “Going through puberty with really bad psoriasis was a little traumatizing,” she says. “Living in the deep south in a small town, I felt really visible.”

Back when Yarbrough was diagnosed, effective treatment options weren’t abundant as they are today. For the first several years she lived with psoriasis, Yarbrough says the only medications available to her were prescription topical ointments and oral medications. To manage the flare-ups, she also tried special diets and light therapy. Nothing made a major difference. Finally, when Yarbrough was 15, she reached a turning point: Her dermatologist offered her a new type of medication called biologics.

Biologics are genetically engineered proteins that, according to Michelle Henry, a New York City-based board-certified dermatologist,  focus on the part of the immune system responsible for inflammation, which can relieve symptoms in many autoimmune and inflammatory conditions. Unlike systemic medications such as steroids, which were once commonly prescribed for autoimmune diseases like psoriasis, biologics are more specific, so they result in fewer side effects.

While they’re commonly used for people with joint pain –– such as rheumatoid arthritis and psoriatic arthritis –– doctors often prescribe biologics to block the action of proteins that cause psoriasis symptoms. The medications became available in the late 1990s, primarily for treating arthritis, and now, there are four different types on the market, including biologics that treat psoriasis. Instead of taking a pill or applying an ointment, people who take biologics give themselves injections or receive infusions through an IV.

Yarbrough says when she first heard about biologics, she didn’t need much convincing. Her dermatologist thought she would be a great candidate, and she desperately wanted to clear her skin. As prescribed by the dermatologist, she gave herself two weekly shots of the biologic medicine in her upper thigh or lower abdomen. She noticed fewer and less severe psoriasis flare-ups shortly after  she started the regimen.

By the time she left for college at age 18 –– three years after she started taking biologics –– her skin was completely  clear, which improved her confidence. “I got to totally start over,” Yarbrough says. “No one knew I had psoriasis.”

Typically, patients give themselves shots of biologics medications on about a monthly basis; other times, doctors may give patients biologics through an IV. Though she only has to give herself one maintenance shot every three months –– which she says is far less taxing than giving herself shots more frequently –– Yarbrough says she knows the maintenance regimen prevents flare-ups. Once, she says, she went on a trip and forgot her dose. Another time, her medication delivery was delayed due to a snow storm. Both times, she experienced psoriasis flares. “I may not always have spots, but it’s always there, lurking,” she says.

Thanks to her medication, Yarbrough says her self-image has continued to improve over the years. While her psoriasis kept her from wearing certain clothes and even played a part in her not dating during her teen years, Yarbrough says she’s grown to appreciate herself physically, even now during her rare flare-ups. And since she’s an actor, she’s especially grateful for the biologics for helping her skin stay clear. “I know how bad psoriasis can be, so I’m so appreciative of my body and what it can do,” she says. “The little flare-ups don’t really get to me anymore.”

For anyone struggling with the effects of psoriasis –– especially those who are noticing their autoimmune disease is affecting their mental and physical health –– Yarbrough says it’s worth talking to a doctor about trying biologics. “They totally changed my body. It’s like I was covered for a decade in poison ivy, and now it’s gone,” she says. “It’s magic. It’s what I prayed for for the entirety of my childhood.”

No comments to show.